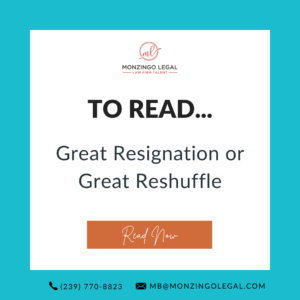 A record-breaking 42.1 million Americans quit their jobs in 2019. Of course, during 2020, many companies were laying off or furloughing employees. Those with a job mostly held on, as there were not as many options for change.

However, as 2021 approached, a Texas A&M University professor, Anthony Klotz, predicted that a “great resignation” was coming. Fast forward, and dozens of articles in the legal and general press are covering this disturbing trend.

This fall, resignation levels across the country were 10 to 15% above the record-setting levels of 2019. According to the U.S. Labor Department, a staggering 4.4 million workers quit their jobs in September. Harvard Business Review reports that employees between the ages of 30 and 45 saw the largest jump in resignation rates, with an average increase of more than 20% between 2020 and 2021. Similar trends are affecting most other developed nations.

The Great Resignation has been called “a sort of workers’ revolution and uprising against bad bosses and tone-deaf companies that refuse to pay well and take advantage of their staff.” In comparison to the corporate world, compensation is usually not an issue in the legal profession. Apparently, however, high salaries fail to make up for the other stressors of practicing law or working in a law firm.

Some people question whether the Great Resignation is even happening in BigLaw, where retention rates according to some are higher than in 2019. But, there is no question that a “reshuffling” is happening in BigLaw. Lawyers are jumping from firm to firm—and sometimes back to their original jobs but for more money (the so-called “boomerang effect”).

Extensive research on motivation indicates that compensation is an extrinsic motivator with limited long-term impact on retention and job satisfaction. On the other hand, intrinsic motivators can be like superglue in keeping you engaged and satisfied at your firm. These include, for example:

So, how can you tap into the intrinsic motivators that have lasting effects on engagement, productivity, and satisfaction? Legal project management, that’s how.

Each of these areas that drive engagement can be tapped into using LPM approaches.

For those new to the topic, LPM is the process of:

To accomplish these steps, communication is critical. Most importantly, this must include clarifying roles and responsibilities with the entire matter team. While these are simple, basic approaches, decades of research on building high-performing teams shows that when individuals understand their role and responsibilities and feel valued as part of a team, engagement skyrockets.

Let’s look at how using LPM can accomplish this through some of its key elements:

At an initial meeting, the group using LPM approaches would often start with a discussion of the key decision-makers and stakeholders of the matter. This would be addressed from the client side, within the law firm, and from outside, such as the judge, witnesses, regulatory agencies, financing organizations, law companies, media, and others. Junior members of the legal team should be encouraged to share their ideas and to understand the various stakeholders and their roles relative to the matter at hand. This can promote a sense of autonomy, meaning, and purpose, as well as social connections and task mastery.

Often created as part of the kick-off meeting or by a few members of the team, the scope of work document helps everyone on the matter team understand the details and parameters of the matter. Long before the current war for talent, it was well-known that people working on a project want to understand the big picture — what is the matter about, why is it important to the client, how will it impact the client, the organization, the world and much more.

Developing a scope of work document not only helps ensure that we are on the same page with the client but it allows everyone on the matter team to understand the client’s objectives, expectations, and success metrics—as well as the work that is in and out of scope. It is easier to stay motivated knowing how you are contributing to the success of the matter and to the client’s meaning and purpose.

You can also help engage members of your matter team in creating the scope document with you instead of just handing it to them. The collaborative process of sharing what each person knows about the client, their expectations, prior matters, similar matters for other clients, and more not only makes each member of the matter team feel valued but also helps them learn and enhance their sense of mastery.

This is a phase or deliverable-based breakdown of the work down to the action step level. Some firms create playbooks that include not only the breakdown of all the steps, but also guidance, precedent documents, or templates to help accomplish the work.

To temper the endemic challenge of associate attrition, it’s important to help them plan and manage their workload and try to have work-life balance. A well-designed WBS gives them visibility on the future of the work and matter – which can provide autonomy to team members. Further, it helps them see how the work they are doing right now fits into the larger whole. It also can take stress off the entire team by providing templates for parts of the work and minimizing last-minute delegation due to overlooking a key task.

A resource assignment chart is common in most companies using project management methods. It helps everyone on the matter team to gain clarity on their roles and responsibilities. This reduces uncertainty, a major factor in underperforming teams. Quite frequently, members of poor-performing teams are not engaged in their work or that of the organization like members of high-performing teams.

The common approach to managing roles and responsibilities in traditional project management is a RACI chart. However, the American Bar Association Business Law Section M&A LPM Task Force developed a legal-specific version of this called a LACI chart. For each workstream or major part of a matter, the chart indicates who is leading, assisting, consulted and informed.

Not only does this typically reduce duplication of work and improve matter profitability, but it also minimizes time wasted and tension over unclear assignments. It can help team members understand where they play a key role. You’ll see autonomy and mastery increase exponentially. The net effect is a positive impact on lawyer satisfaction and engagement.

These are but a few of the ways that using LPM can help increase engagement and reduce stress among your matter team members. You can learn about many more in the new book written by me and David Rueff from Baker Donelson, The Power of Legal Project Management.

Susan Raridon Lambreth is a founding principal of LawVision, a leading law firm consultancy, and is the founder of the LPM Institute. She is the author of four books on legal project management (two published by the ABA), three on practice group management, and a new book on legal operations published by the Practising Law Institute.